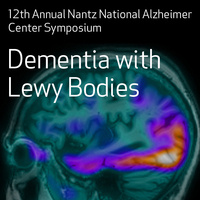 The Nantz National Alzheimer Center symposium will examine the current knowledge regarding dementia with Lewy bodies (DLB). DLB shares the same defining pathology as Parkinson's (Lewy body pathology) but is associated with a faster progression. DLB is the second most common neurodegenerative cause of dementia after Alzheimer's disease. Despite its prevalence, DLB is frequently not recognized and has been studied to a lesser extent than Parkinson's disease and Alzheimer's disease. Our program will cover multiple aspects of DLB. We will review the evolution and clinical features of dementia with Lewy bodies. A review of the differences in the pathology and comorbidities present in DLB will follow this presentation. The symposium will continue with a description of the genetic landscape in DLB and its relation to Alzheimer's disease and Parkinson's disease. Moving to diagnosis and prognosis, the subsequent two presentations will describe imaging, cerebrospinal fluid, and blood biomarker advances in this condition. The last two sections will review the clinical progression and the impact on caregivers, ending with an overview and challenges for clinical trial design in DLB.

You're not going yet!

Login to interact with events, personalize your calendar, and get recommendations.